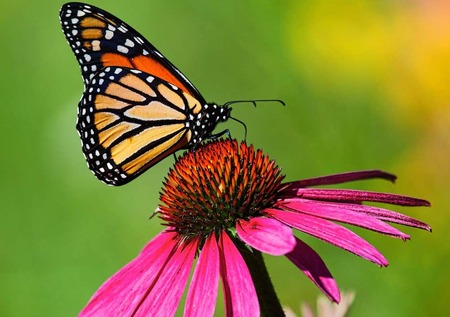 Wondering about all the butterflies?
During the drought it was a major concern whether the insect life would return as it is a critical component of many food chains, however, at least in the short term, we need not have worried. The response to the magnificent rain falls was far greater than expected, and one surprise was the appearance of a large numbers of butterflies and moths. However, many of those with enquiring minds were mystified by where they had come from. Most thought it had something to do with simply waiting until the drought broke, but no one seemed to know for sure.
The Sunday Telegraph on April 19 confirmed that we were on the right track when it quoted university research, Chris Sanderson when he explained:
‘A whole lot of caterpillars and pupae were waiting for good conditions and these all emerged at once. The caterpillars like to feed on new growth and due to the high rainfall, there was plenty about.’
On a serious note, he warned of the threats:
‘The threats to butterflies are land clearing and pesticide use, including those used in backyards and gardens. These harm bees and butterflies.’
Hopefully, the lessons learn by the shortage of products due to the coronavirus, will show that homemade remedies are both safer, and much cheaper than those off the shelf products.


Small genetic changes prevent a normally fatal poison from killing monarch butterflies.
By editing these genes into laboratory fruit flies using CRISPR technology, scientists have reconstructed evolution and instantly conferred – in the flies – the same toxin resistance enjoyed by monarchs.
Provided
Monarch butterfly
“We experimentally went back in evolutionary time to reconstruct an event that happened naturally several times, several million years ago,” said Anurag Agrawal, professor of ecology and evolutionary biology, and co-senior author on a new paper published with University of California, Berkeley, colleagues in Nature, Oct. 2.
“Monarch butterflies are a beloved insect,” Agrawal said. “They only eat milkweed, and survival of their annual migration depends on sequestering this plant’s toxins.”
This new research shows how the monarch butterfly evolved resistance to a class of plant toxins and changed the nature of ecological interactions across North America, said Agrawal.
Monarch caterpillars grow up on milkweed plants, which harbor a poison called cardiac glycoside. For most other caterpillars and animals that happen to eat milkweed, the cardiac glycoside poisons them; the chemical obstructs the body’s sodium pumps, which transport life-maintaining salt across cell membranes.
Simply put, the poisonous cardiac glycosides attach to those sodium pumps, add gunk to the salt-transport mechanism and halt their function, Agrawal said. But the specific variant of the monarch’s gene prevents its sodium pump from clogging with poison, effectively granting immunity to monarchs. Most other species – particularly those that stay away from milkweed – don’t have this genetic change.
When the researchers inserted the gene into the flies in the laboratory, they became immune to cardiac glycoside.
“Life was formed once and kept branching out to the diversity we know today, and we have some genes that are more or less conserved from the beginning of time,” Agrawal said. “Our study suggests that, although there is a universal ancestor to life on Earth, small modifications were critical in specific adaptations. We now have the tools in evolutionary biology to reconstruct how organisms evolved over millions of years.”
Other contributors to the paper, “Genome Editing Retraces the Evolution of Toxin Resistance in the Monarch Butterfly,” include co-senior author Noah Whiteman, University of California, Berkeley; and lead authors Marianthi Karageorgi, University of California, Berkeley, and Simon C. Groen, New York University. Among the co-authors is Amy P. Hastings, Cornell research support specialist.
The National Science Foundation and the John Templeton Foundation funded this work. 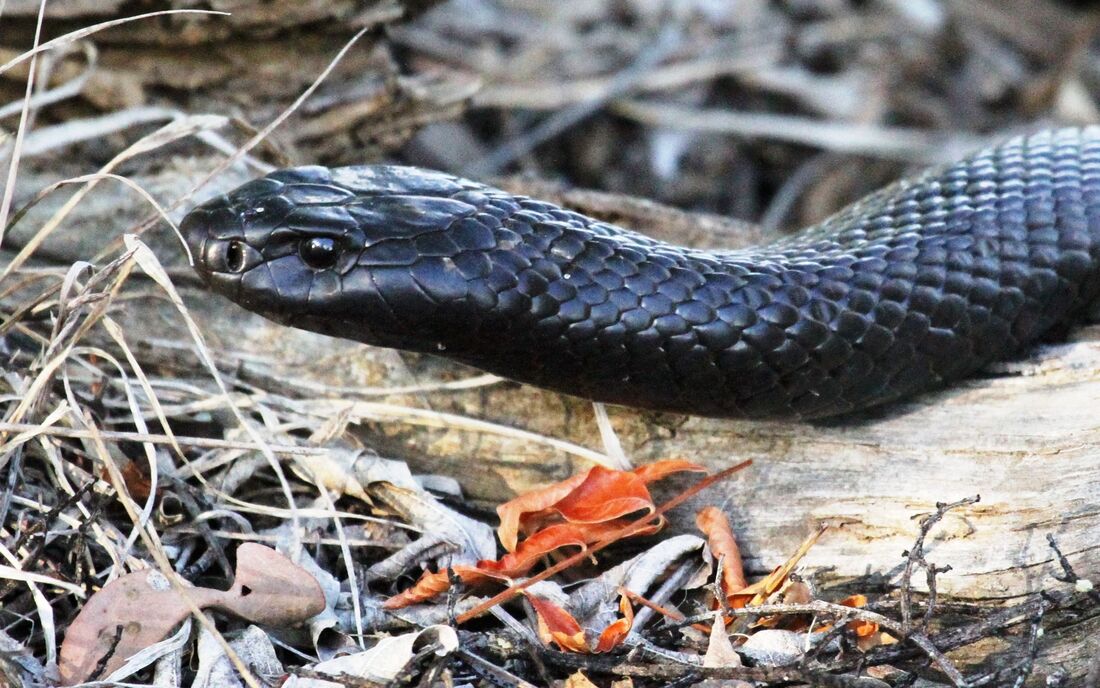 PHOTO CREDIT: Rod King
Snake
By Rodney King
I just called him or her ‘Snake’, and when it called for a drink or a spot of hunting, it was a most welcome visitor. This was in total contrast to another visitor at the time, my casual rat controller Brownie, which would often hang out in an old harvester in a shed. Brown snakes, like all reptiles prefer to retreat rather than fight, but they are far less tolerant and it’s best to just leave them alone. But with Snake, I was never in danger as I followed it around with what was then as it went about its business.
It was a Blue-Belly Black and I say ‘was’, as it is a few years since the last sighting, however it will be remembered for many reasons, but mainly for totally ignoring me during hunting expeditions in the garden. The photo accompanying this article was taken when it was investigating every hollow, every nook and dense area looking for frogs, but happy any snake is happy to dine on lots of other critters. Obviously, the trust levels on both sides were high as I walked a parallel course, Snake only had eyes for prey, and I only eyes for Snake as I fired off hundreds of camera shots. Taking this photo was easy, I knew Snake was heading for the strainer so I simply waited on the other side and snapped away as it came over the top. Incidentally, other snakes such as the Green Tree Snakes also check-out strainers with hollows, as other reptiles and frogs inhabit them. On another occasion when heading for the river, I decided to leave the bike rather than disturb a small snake which only had its tail on the outside of a gate strainer; the rest was down the hollow.
Snake was an adult, about 1.3 metres and I know this by the length of a skin, which became the star attraction at a kindy “show and tell” session at Bingara Central. Thus, the memory of Snake is one I treasure, but moving on, let’s read a little more of these wonderful Australian creatures.
The Australian University
Introduction
Despite its size and relative abundance, not much is known of the habits of this handsome “poor cousin” of the Red-bellied Black Snake.
Identification
Blue-bellied Black Snakes are predominantly a shiny bluish- or brownish-black, with a dark bluish-grey or black belly. Some individuals can be cream/pale grey in colour, with each scale edged in black, giving a spotted appearance (hence their other common name Spotted Black Snake). Others may be intermediate between the two, having a mixture of pale and dark scales that form thin broken crossbands; however in all forms the head is uniformly dark.
The head is relatively broad and deep, and barely distinct from the robust body. There is an obvious brow ridge over the darkly-colored eye.
Habitat: The Blue-bellied Black Snake can be found in a range of habitats, from river floodplains and wetlands to dry sclerophyll forest and woodlands. They shelter under fallen logs, in deep soil cracks or abandoned animal burrows, and also in dense matted vegetation.
Distribution: The snake occurs just west of the coastal ranges in southeast Queensland and northeastern New South Wales
Feeding and diet: In the wild, the species eats a variety of vertebrates including frogs, lizards, snakes and mammals. It also eats the occasional invertebrate. Blue-bellied Black Snakes are primarily diurnal hunters; however they will forage late on warm evenings.
Breeding behaviours: Male combat and mating has been recorded in wild Pseudechis guttatus occurring in the period between late winter and early spring (late August-early October). Combat appears to involve initial biting, followed by intertwining, and then pursuit with more biting. Gravid females have been observed in the wild in late winter-early spring (5 September-October).
In captivity, mating snakes coil loosely together with their tails wrapped around each other. The male occasionally moves his head back and forth along the female's body during copulation, which may last up to five hours. After a successful mating, the male shows no further interest in the female. Gravid females will usually refuse food in the period between mating and egg-laying.
Between 5 and 17 eggs are laid which may take up to 87 days to hatch, depending on the incubation temperature. The young remain in their egg for one or two days after slitting the egg case before emerging to begin their independent lives.
Conservation status: Not listed as threatened.
Danger to humans: Usually a shy animal, the Blue-bellied Black Snake will defend itself aggressively if threatened. It will first give a warning display, hissing loudly and holding its flattened forebody in a low S-shape. Further harassment will cause the snake to strike out, although it sometimes does so with a closed mouth. If the snake does bite it often hangs on and chews, ensuring a good dose of venom is injected. The venom is highly toxic and contains coagulants, haemolysins, neurotoxins and cytotoxins. Anyone suspected of receiving a bite from a Blue-bellied Black Snake should seek immediate medical attention.
Note: While I may appear to have a casual approach to snakes, it is based on keep observations and usually after numerous sightings and behaviour on my part to build confidence. Snakes should be left alone, do not attempt to move or kill them unless it is absolutely necessary. Most of people who are bitten, were trying to kill the reptile. Rod  ​
Photo used under Creative Commons from philip.mallis