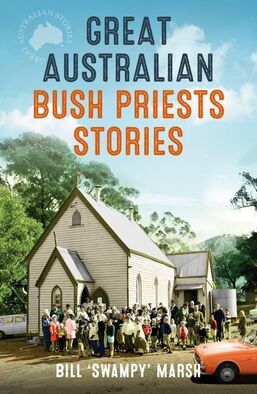 Great Australian stories of faith and friendship in outback Australia, gathered by the inimitable Bill 'Swampy' Marsh - bestselling author of Great Australian Flying Doctor Stories and Great Australian CWA Stories.
'the term "Bible bashing" took on new meaning in our household ... Mum used to suffer from bunions; that is until she started bashing them with the heavy family Bible, believing the Lord's weight behind the Lord's word could move anything from mountains to bunions.'
Priests, pastors and preachers play a vital part in the lives of people in remote and regional Australia. Often from the city, they are posted to places they have never even heard of to provide spiritual care for communities over areas larger than they could ever imagine. No matter their religion, they are all committed to helping people in the bush - whatever way they can! they shear sheep, put up fences, travel hundreds of kilometres to visit their parishioners, act as counsellors, set up schools and programs, and advocate for Aboriginal and asylum seeker rights.
Get it online here : https://www.bingaranewsagency.com/books.html
​
Bingara Rugby Union 1897-1927
Part 1
Various versions of rugby are thought to have been played in England from 1174 AD onwards, and the first written rules were decided in 1845, by the pupils and masters of the Rugby School. The natural progression of the game to the colonies followed, with matches played between Sydney based troops and the crews of visiting ships. In 1874 the Sydney Metropolitan Rugby Union was formed and from there the game quickly spread. For example, in 1882 a game was played between NSW and Queensland.
The first match involving Bingara appears to have been against Warialda in August 1897, with Warialda winning 20-0 (Australian Town & Country Journal (Sydney) of 28th August 1987. This loss was probably not unexpected as the same Journal on 9th October 1897, quoted the Chair of the Warialda Progress Committee who said, ‘Warialda has a strong club with a well appointed recreation ground. ’Also, a report in the Inverell Genealogical & Historical Society noted that football was played regularly in 1890s -1900s between Bingara, Warialda, Molroy Wollaroos, Gulf Creek, Moree and Town verses Country matches.
Further evidence of the game is found in an article (Bingara Telegraph) of July 1898 which previewed a match between the Commercial Football Club and the Bingara Football Club. This indicates at least two clubs were based in Bingara. The Commercial players were listed as;  J Hamilton, E Mulligan, E Griffiths, J Smith, J Lahey, F Forster, R Pelgar, C Murray, E Quickenden, Hartman, J Gibbs, S J Williams, S Clark, J Hedgers and C Johnson. Additionally, an Inverell club called Oxfords had been formed and a report in the (Bingara Telegraph) of 31st August 1897 said that the team had, ‘Warialda out on the previous Saturday.’
Drinking silver stolen
Bingara’s bad luck at Warialda continued and an article (Australian Town & Country Journal (Sydney) of 17th September 1898, reported that while a game was in progress, some ‘scoundrel took the drinking silver’ of the fifteen Bingara players. The total loss was six pounds and the journalist suggested that the missing money would have purchased,’16 nips per man, of the best Warialda Chain Lightening’, obviously a popular drink of that time. We can only imagine the uproar if someone nicked the after game drinks of either the Bullets or the Wombats during a local derby.
Series to be continued
​